Obituary for Rosemary A. Delano (Garland) 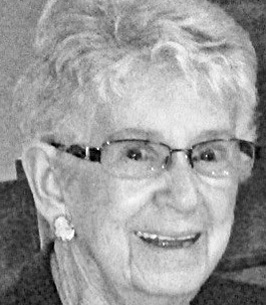 MECHANICVILLE - Rosemary Garland Delano, 98, former longtime resident, died Friday, Nov. 18th at Schenectady Ctr. For Rehab and Nursing, after an extended illness.
Born in Troy, May 30th, 1924, she was the daughter of the late John and Emma Adams Garland, and was a graduate of Mechanicville High School. Upon graduation, Rosemary went to work at the Watervliet Arsenal where she proudly supported the U.S. war effort as a real life “Rosie-the Riveter”. After marrying and starting a family, Rosemary was a homemaker, providing a pleasant home for her husband and three daughters, and occasionally working part time jobs at local businesses.
She was a former communicant of Assumption-St. Paul Church and St. Mary’s Church of Ballston Spa. Rosemary stayed active and loved the outdoors. She was happiest when walking the beach in Maine, working in her flower garden or playing a round of golf, which she continued into her 90’s. She was also an accomplished contract bridge player for many years.
Her husband of 40 years, James Delano died in 1983, and she was also predeceased by brothers William and Jack Garland and sister Catherine “Noni” Strubel.
Survivors include daughters Catherine and Cliff Foley of Wappinger’s Falls, Kristine and Bill Thorne of Clifton Park , Jayne and Michael Moreau of Ballston Spa. Grandchildren: Jennifer (Chuck) Binder, Claire (Steve) Ariyan and Lisa Throne and great grandson Jordan Damore. Also her sister-in-law Rosemary Garland of Mechanicville and nieces, nephews and their families.
Private services will be held at the convenience of the family, with burial in St. Paul’s Cemetery, Mechanicville.
Ion lieu of flowers, remembrances may be made to St. Jude’s Children’s Research Hospital, in memory of Rosemary A. Delano.