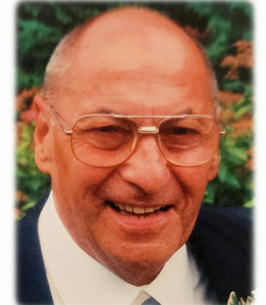 MECHANICVILLE – Joseph L. Alonzo, Sr., of Hemstreet Park, died peacefully at Samaritan Hospital on Friday, September 9, 2022, after a brief illness. Born in Mechanicville on March 20, 1933, son of the late Dominick and Caroline Cerrone Alonzo, he was a 1950 graduate of Mechanicville High School.
Joe proudly served his country, enlisting in the US Navy shortly after high school. Upon completion of his military duties, he began his illustrious career and also married the love of his life. He worked as and was a skilled carpenter, working for Macy’s and the State of New York. In 1956, he married his wife of 66 years, Ellen Sykes Alonzo. They built their first and only home in Hemstreet Park with the help of his brothers, most of whom had a construction background. He then bought his own dump truck and ran a trucking company for nearly 15 years. In 1972, Joe purchased Wever Petroleum and created a successful multi-faceted enterprise, with his family by his side before retiring in 2007. Although “retired”, Joe could be seen at the office daily, keeping a watchful eye.
Joe was an avid golfer and longtime member of the Mechanicville Golf Club. He also loved the casino, especially trips to Las Vegas, where he was a loyal craps player. He was a 64-year member and supporter of the Hemstreet Park Fire Department, as well as the American Legion Post 91, Mechanicville-Stillwater Elks Lodge, and former member of the Mechanicville Athletic Club and the Italian Fraternal. Joe especially enjoyed hosting many events at his home for just about any holiday or family function. He took great pride in them and with the help of his family, always made sure they were a great time for all who attended. Joe was a mentor to many of his nieces and nephews. He was always there for them when they needed him and proudly stood by their side, even through times of strife.
He is survived by his wife Ellen, whom he married on July 11, 1956, his children, Michele(Jerome) Mastrianni of Saratoga Springs, Joseph(Meg) Alonzo Jr, Michael(Deanna) Alonzo and Julie(James) Brennan, all of Mechanicville, sister-in-law Mary Alonzo, grandchildren Nicole Mastrianni, Erin(Chris) Carney, Sara(Mike) D’Aversa, Chad and Seth(Shawna) Alonzo, Jessi(Paul) Boucher, Kirstyn(Cody) DeOrdio, Adam and Christian Batto, great grandchildren Charlotte, Jackson, Conor, Liam and Molly, and many loving nieces and nephews and their families.
Joe, the last of 9 brothers, was predeceased by his siblings Alfred, Louis “George”, Anthony “Tio”, Armand “Duke”, Arthur, Julius “Julio”, John, and Dominick “Dan” Alonzo as well as his nephews Louis "Louie" Alonzo and Dominick Alonzo.
Calling hours will be held at All Saints on the Hudson Church(St. Paul’s), 121 N Main St, Mechanicville, on Monday Sept. 12th from 4-6:45PM. A Mass of Christian Burial will follow starting at 7PM. Military Honors and entombment in St. Paul’s Mausoleum will be held on Tues at 10AM at the cemetery pavilion.
In lieu of flowers, remembrances may be made to the Hemstreet Park Fire Department, 137 S Linden St, Mechanicville, or Alzheimer’s Assoc., 1003 New Loudon Rd, Suite 201, Latham, NY 12110.