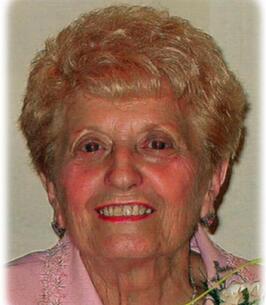 MECHANICVILLE - Rose C. Zappone, 98, native and lifelong resident of Mechanicville, died peacefully on Friday, September 2, 2022, at Eddy Village Green, Cohoes. Born April 24, 1924, she was the daughter of the late Anthony and Teresa Ercolino Pignatelli and wife of the late Anthony “Tut” Zappone, who died in 2012.
In addition to her husband Anthony and her parents, she was predeceased by her sisters Odelia Cimino, Mary Carr, Adeline Rubino, Anna DeLuca, Teresa Whalen, Carmella Fusco and brothers Dominick, James, Vincent, Joseph and Alphonse Pignatelli.
Survivors include her daughters: Marlene (Richard) Rourke of Mechanicville, Mary Ann (John) Smith and Linda(Philip) Roddy all of Schaghticoke. Also her beloved grandchildren Erin(Mike) Rabbitt, Sean and Lauren(Billy) Smith, and Sara Roddy, and great grandchildren: Emma, Eli, William “Liam”, and John Anthony, and also her sister-in-law Mary Alonzo.
Rose was a former member of the Assumption-St Paul Church and the Junior Dante Club.
Rose took great pride in her home and family. She was well known for her pizza on Friday nights, playing Pokeno on Saturday nights and porch sitting with her friends. Rose enjoyed shopping, playing bocce ball and cooking for her family on Sunday afternoons. She had a gift for singing and was a talented seamstress. Most of all, she enjoyed being surrounded by her family and all her friends.
The Zappone daughters would like to thank the staff at Eddy Village Green for their care, compassion and concern for their mother Rose and for all the courtesy shown to their family.
Calling hours will be held on September 7th from 12 - 1PM at All Saints on the Hudson Church, 121 N Main St, Mechanicville, NY 12118. A Mass of Christian Burial will follow immediately after, at 1PM, followed by burial in Saratoga National Cemetery.
In lieu of flowers, remembrances may be made to Alzheimer’s Association, 1003 New Loudon Road, Suite 201, Cohoes, NY 12047 or The Eddy Foundation, 310 S Manning Blvd, Albany, NY 12208, in loving memory of Rose C. Zappone.