Obituary for Gloria A. Devine 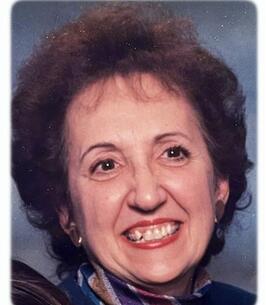 WATERFORD - Gloria Ann Devine, 88, of Davis Drive, died peacefully at St. Peter’s Hospital Hospice Inn, on August 26, 2022, following a 10 year battle with Alzheimer’s diease. Born in Cohoes on February 13, 1934, she was the daughter of Leo and Aline Martel and wife of the late Leo Francis Devine Jr.
A St. Marie’s High School of Cohoes graduate, she was a longtime secretary for the American Lung Association, Albany until retiring after over 20 years. She had previously worked as a bookkeeper for the Putnam Knitting Co, Cohoes. She was a member of United Travelers and the Cohoes Senior Citizens. A longtime member of St. Mary’s Church, Waterford, she was a member of its Altar Society and the Columbiettes. At home she happily raised her two daughters, enjoyed baking, gardening, ceramics and tea parties first with her grandchildren then with her great grandchildren.
In addition to her husband Leo, she was sadly predeceased by her daughter Judith Devine.
Survivors include her daughter Melodie Birkmayer of Waterford, granddaughters Pamela(Paul) Sheehan and Gwendolan(Wayne) Carter, great grandchildren Irelynn, Breanna, and Molly Sheehan, Alyssa and Jace Carter, and her godson Douglas Girard.
Calling hours will be held on Saturday, September 3rd from 9-11AM at DeVito-Salvadore Funeral Home, 39 S Main St, Mechanicville, NY. A Funeral Home Service will follow starting at 11AM with burial to follow at St. Joseph’s Cemetery. Waterford. In lieu of flowers, remembrances may be made to the Alzheimer’s Association or Community Hospice, in memory of Gloria A. Devine