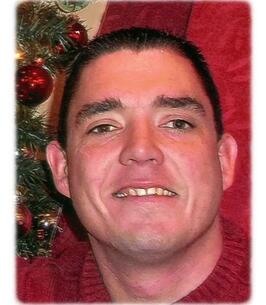 HALFMOON - John Sergio Michaels, Jr, 42, of Johnson Rd, died suddenly at Samaritan Hospital On June 21, 2022, after suffering a heart attack at his home. Born in Niskayuna on February 28, 1980, he was the son of John and Christine Johnson Michaels, Sr of Halfmoon.
Affectionately known as “Johnny” or “Pudge”, by most who knew him, he was a proud Red Raider and 1998 graduate of Mechanicville High School, where he was a three sport athlete, competing and excelling in football, baseball and basketball. John then graduated from Hudson Valley Community College and eventually from SUNY Albany, summa cum laude, with degrees in Communication and Criminal Justice. He has worked for the Watervliet Arsenal for nearly 20 years, as a Quality Assurance Specialist.
John’s life recently has revolved around his two children, sons John III and Jordan. He was a dedicated father who always assisted them in any way he could, athletically or academically. He poured his heart out into all aspects of their care. Being a single parent made this task even more time consuming, but he was dedicated to providing around the clock attention.
Growing up, John learned a love of the outdoors from his father, especially hunting and bass fishing. Yearly trips to the Oneonta hunting camp or tournament fishing with several friends were all things he looked forward to. One of his many talents included cooking, especially known for his pizza, ribs and fish dinners. A great athlete in school, he continued his love of sports as he got older. Golf, waffle ball, bowling, Bocce, pickup basketball games and softball name just a few things he did to stay active. He loved to sing and was a huge country music fan and could remember just about any song from the past.
John was also former bartender at the Mechanicville-Stillwater Elks Lodge # 1403, and was a 24 year member there.
Survivors in addition to his parents John and Christine include his beloved sons John Sergio Michaels III and Jordan Vincent Michaels, as well as their mother Jodi Saunders Michaels, a number of aunts, uncles, cousins and a host of friends. He was predeceased by his grandparents Jack and Dora Michaels, and Roman and Wanda Johnson.
Calling hours will be held on Saturday from 10AM - 12:00PM at Corpus Christi Church, 2001 Route 9, Round Lake, NY 12151. A Mass of Christian Burial will follow at 12:30PM, with burial to follow in St. Paul’s Cemetery.
In lieu of flowers, remembrances may be made to a Shriners Hospital for Children, Attn: Processing Center, PO Box 947765, Atlanta, GA 30394 or Estherville Animal Shelter, 100 Russell Road, Greenfield Center, NY 12833, in memory of John S. Michaels, Jr.