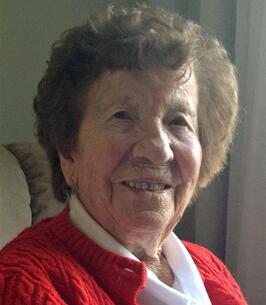 BALLSTON SPA - Maria (Mary) Luigia (Verdile) Parente, 106, died on June 30, 2021, with her family, at Hoosick Falls, New York. She was born on August 1, 1914, in Sant’Elena Sannita, Province of Isernia, Italy, to parents Benedetta De Pasquale Verdile and Michele Verdile. At age 6, Mary travelled by steamship S.S. Patria to America with her mother, her sister Nicolina (Micky), and her brother Raphael (Ray). Her father, who had arrived six years previously, had saved their passage fare. He greeted them at Ellis Island through the grate of a fence. Mary had never seen her father before, as he had left for America before her birth. At Ellis Island, Mary, her siblings, and her mother were denied entry and deported, as young Ray had contracted a scalp rash on the sixteen-day steamship voyage. Mary, her mother, and siblings returned to Sant’Elena, to live with her father Michele’s parents. One year later they made the trip again. This time they were permitted entry and boarded a train bound for Albany. On arrival, they climbed into a buggy drawn by a horse and traveled north, where they settled in the hamlet of Smith’s Basin, Washington County. In pursuit of work, the family moved to the City of Mechanicville, where Mary met William J. Parente. Mary became united in holy matrimony at the Church of the Assumption, with her husband William J. Parente on August 4, 1935. At age 29, on January 3, 1944, Mary became a naturalized citizen. Mary was employed in the Strang Mill and at the State Theater. In later years, she was proudly employed at her brother’s restaurant, Verdile’s, in Troy. Mary and William had three children, Dominick (Angela) Parente, Marie D. (William H.) Keniry and Bernadette M. (John D.) Steele. They dedicated their lives to the successful raising of their children. They both worked hard and provided much opportunity for them. Mary’s life is an expression of beauty and peace. She lived life fully by enjoying the company of others, a magnificently simple life rich with faith, family, friendships, and traditional Italian food. She had remarkable and boundless hope which she shared without reservation. Mary was a selfless source of unlimited encouragement and gentle perfect advice for family and friends. She lived every day with delicate kindness, dignity, and a unique offering of unlimited love to all. Her faith was unwavering and inspiring. Mary was an active member of the Church of the Assumption (now All Saints on the Hudson), and in later years, St. Mary’s in Ballston Spa, where she enjoyed the company of innumerable dear friends.
In addition to her parents, and her husband who died in 1977, she was predeceased by her sister, her brother, her in laws and her daughters. She is survived by her son, his wife, and her sons in law. She is also survived by eight grandchildren William J. Keniry (Laurie), Patricia Ladu (Kurt), Mary Margaret Keniry, John D. Steele Jr. (Amy), Marianne Lee (John), Maria Steele (Daniel), Daniel J. Keniry (Margaret) and Matthew W. Steele (Michelle), fifteen great grandchildren, Grace M. Keniry, Mary N. Keniry, Bryan Ladu, Maizie Steele, Marguerite Steele, Mary Jane Steele, Luke T. Fallati, Caitlyn Lee, Meghan Lee, Nicholas Matrazzo, Amanda Matrazzo, Paul Matrazzo, Silas Keniry Peterlin, Ida Maeve Keniry Peterlin, and Miles Peterlin Keniry, and nieces Mary Cassidy, Antionette Enzogna, Bernadette Verdile and nephew Vincent P. Verdile. A Funeral Mass will be held at All Saints on the Hudson Church on Tuesday July 6, 2021, at 1:00 pm, 121 North Main St., Mechanicville. Burial will be at St. Mary’s Cemetery, Waterford, the site of burial of her husband. Friends and relatives may call at the DeVito-Salvadore Funeral Home, 39 So. Main St. Mechanicville, before mass from 11 am to 12:30 pm. In lieu of flowers contributions may be made to EWTN (Catholic Television Network) 5817 Old Leeds Road Irondale, AL 35210.