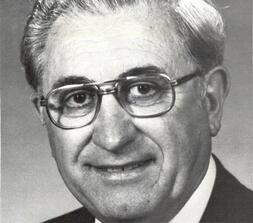 Memorial Candle Tribute From
DeVito-Salvadore Funeral Home, Inc
"We are honored to provide this Book of Memories to the family."
View full message >>>
In Memory of
Lawrence F.
Rinaldi
1917 - 2016
Menu
Send Flowers

STILLWATER - Lawrence F. Rinaldi, 99, died Sunday morning July 24th at Saratoga Hospital, after a brief illness.
Born in Mechanicville, April 12, 1917, son of the late Anthony and Assunta Rinaldi, Larry was a retired conductor for the Boston and Maine Railroad for many years before retiring. An entrepreneur and workaholic, Larry had operated an appliance store in his hometown years ago, and owned and operated Tri-County Vending and Coffee Service for many years.
A volunteer fireman, charter member and 54 year active member of the Arvin Hart Fire Dept, Larry had also served with Stillwater Fire Dept.
Larry also had a long and distinguished 63 year Life member of the Mechanicville - Stillwater Elks Lodge 1403, a former Exulted Ruler in 1961 and a past NY Northeast District Deputy Grand Exulted Ruler in 1979, overseeing 17 Lodges. Larry was a well known Elk who was instrumental in the formation of the Ballston Spa and Scotia-Glenville Elk Lodges, who was regarded as an expert and tutor of Lodge Ritual instructions.
Larry was predeceased by his wife of 63 years Betty Sharpe Rinaldi and his son Lawrence F. Rinaldi, Jr.
Survivors include his children: Dominick (Margaret) Rinaldi of Dayton, Oh., Mary (Joseph) Kurasz of Easton, Pa., Thomas (Linda) Rinaldi of Stillwater, Margaret Rinaldi and husband Reimund Herberg of Seattle, Wa., and Peter Rinaldi of LaQuinta, Ca. Also 9 grand and 10 great grandchildren, along with many nieces/nephews and their families.
Larry was also predeceased by his sisters Mary Carriero and Lena Marmillo and brothers Dominic, Salvadore, Michael and John Rinaldi.
A Funeral Service will be held on Thursday evening at 7 PM at the Mechanicville-Stillwater Elks Lodge, 300 Park Ave., Mechanicville. Burial in St. Peters Cemetery.
Visitation of family, friends and brother Elk will be held on Thursday from 4-7 PM at the Park Ave Lodge.
In lieu of flowers, remembrances may be made to the Elks National Foundation Scholarship, c/o Elks Lodge 1403, PO Box 649, Mechanicville, 12118 in memory of Lawrence F. Rinaldi

To send flowers to the family or plant a tree in memory of Lawrence F. Rinaldi, please visit our Heartfelt Sympathies Store.